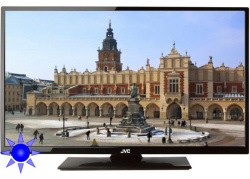 For reasons that escape me there seems to a trend for standby lights on home electronics to be blue "searchlights". This "feature" is especially annoying when the electronics are in a bedroom or the home is a one room flat for that matter. Some manufacturers helpfully allow these to be turned on, but not all, and not on the JVC LT-39C740 I recently bought from Currys.

A bit of black will fix the problem but often, like on the LT-39C740, the same window for the blue light is also the window for the remote control sensor so the black tape solution also disables the remote control. However, with a bit a lateral thinking there is a solution. Remote controls use infra-red so adding a filter to allow infra-red only is another solution. The trend for using blue LEDs helps now. A red filter will likely extend down to infra-red but certainly block blue light.

A free fix and you get to eat the chocolate. What could be better?