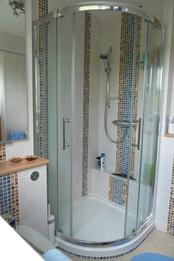 There are a lot of thermostatic showers around but most seem a bit shy of giving their flow rate (and non-thermostatic ones are also as bad). The only info I could find was from Aqualisa at the end of their Opto Thermo brochure where there is a comparison of 10 different makes. Naturally the Opto Thermo comes out on top but even so it still has an impressive flow rate of ~10l/min.

My house has a very low pitch roof so the cold water tank is on top of the ceiling joists. I have about 64cm from shower head to bottom of cold tank and about 42cm of water depth in the tank. Most shower units reckon they need a minimum of 1m between shower head and bottom of cold water tank, which they call 0.1 bar of pressure. Of course it is the total height of the water which counts so 1m to bottom of tank would be more than 0.1 bar unless the tank is empty. The test report at the end has used a height of 1.53m. Clearly the Opto thermo (external) was the one I needed to go for to get anything like a decent flow rate. I could have have gone for a shower pump but they make noise and I didn't want that, nor the huge job of converting to a main pressure hot water system, which would also exclude me from doing any work on it.

The hitch in this plan was the availability of Opto Thermo. There are sites listing the Opto Thermo for sale but I waited months with getting one and now Aqualisa don't even list the Opto Thermo as far as I can find which is why the brochure is a local copy, one I'd saved to my PC. So instead I ordered the Aqualisa Colt. This is almost the same as the Opto Thermo the differences are a better shower head but internally instead of 3 different thermostatic valves, optimised for each application, gravity (low pressure), combi, and high pressure, that the Opto Thermo had, the Colt has just one thermostatic valve type, so something of a compromise (but obviously less for the manufacturer to make and stock). The Colt was also a bit cheaper than the best price I had found for the Opto Thermo. The valve is interchangeable (so Aqualisa Support tell me) between the Colt and the Opto Thermo so it would be possible to fit the better valve. The downside is that the Colt has red limit button on the temperature knob which the Opto Thermo doesn't so that button would then not work and might have to be glued or something to stop it rattling. Aqualisa support reckoned the Colt should achieve at least about 70-80% of the Opto Thermo. Unfortunately Aqualisa have not repeated the testing with the Colt, seems like no one is interested in flow rate. Maybe it's because I'm an engineer at heart as well as by occupation that I like figures when planning a project.

So much for the background, for those with a low water head, here are my results. As already mentioned I have 64cm from shower head to bottom of cold tank and about 42cm of water depth in the tank, 1.06m in total. My pipe run is quite long but it is all in 22mm except for the last few cm. The run is 2.4m cold tank to under the floor, then 4.5m under floor and finally 1.1m from floor to Colt control, 8m in total. Measured flow rate is 4.6 l/min. That's consistent with the expected results, ~7 l/min at 1.53m head, ~4.7 l/min at 1m head. I find that this flow gives a perfectly adequate shower. According to the this excel calculator for winter (6C water in, 40C out) this is the equivalent to a 11kW electric shower. Personally, had I not done the calculation, I would have said the flow rate was more than a 11kW electric (I have a 9.5kW electric in another room). It is certainly a better shower that my electric but maybe that is down to the head.